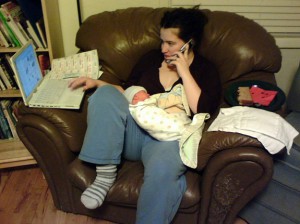 Take a deep breath and write down all the things you’re currently juggling at the moment.  How many things are there and how well do you think you’re doing them? In our modern world of “labor-saving and production-enhancing devices”, it’s become a badge of honor to be able to multi-task.  In fact, many people who are interviewing for a job proudly point out this remarkable ability to do many things at once. Chances are you’re probably listening to music while alternatively checking your email and working in another window on a project; that’s fairly standard. If you’re a parent, you’re probably nodding your head in agreement that you are a multitasking genius. And if you’ve got a teenager in the house, they’re most likely watching TV, texting and working on homework all at the same time.

So here’s the hard truth: research has shown that multitasking is not as productive as concentrated time because the brain is not wired for fully focusing on simultaneous tasks. Why? Too much information needs to be catalogued, redirected and focused upon as we switch back and forth from one task to the other. We’re sure you’ve said more than once in the course of your busy day as you moved from one thing to another, “Now where was I?” Indeed.

Perhaps the most visible example of multitasking is talking on our cell phones while driving and most states have laws against distracted driving while using handheld devices. But using a Bluetooth in your car may not be the answer either as that, too, has been proven to limit your ability to concentrate on your driving. Think also about how multitasking can create distracted relationships.

When your spouse, family members, friends or co-workers ask for your attention do you stop your multitasking to fully concentrate on them? Do you stop what you’re doing and pay attention? If you don’t, what you’re saying to them is that you’re simply too busy to care about what they’re saying or need from you. They may also feel disrespected and not important enough or not worthy of your time. Obviously, if what you’re doing cannot be put off, you can always reschedule some genuinely attentive time with them in the future, but let’s be honest, it probably doesn’t happen enough does it?

In our fast paced, always on, digitally connected world it may not be realistic to not multitask at some point in our day; that’s just the way we roll now. But if you focus and pay attention when you’re in a conversation with people, you will show them they matter. After all, when you’ve got something to say, you want people to listen to you, don’t you? Surely that text or email can wait a while and the news you watch is always on a continuously loop anyway and your favorite show can be recorded for later viewing. What can you pause in your life today to be fully attentive to the world around you?